When used frequently, even the best knives begin to dull and lose their edge. But the inevitable dulling of your knife doesn’t need to signal the need for a new blade. Learning how to properly sharpen your tactical knife will allow you to continue using it effectively for years to come, and it’ll help you maintain any other knives in your arsenal as well to combine with your gear such as tactical jacket, tactical boots…

In this guide, we’ll go into the best method to sharpen your tactical knife. 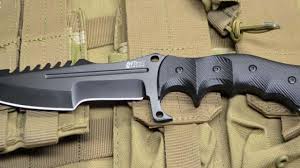 There are a few different ways you can sharpen your tactical knife, but we’ll be focusing on using a sharpening stone for our method.

Sharpening stones can be found in all sorts of shapes and sizes. Don’t be fooled by terms like “whetting”; this means the same thing as using a sharpening stone to improve the edge of your blade.

Sharpening stones improve the edge of your blade by grinding the knife blade along the stone at a particular angle. This friction removes very small amounts of the knife’s steel, wearing it down to a finer edge along its length. Sharpening stones come in different “grades” which rate how big their gritty, abrasive particles are.

Higher grades indicate a higher particle density, meaning that the gritty particles are smaller. Smaller particles lead to a finer finish and a sharper edge. In general, you’ll want to find a sharpening stone with a grade of 1000-3000, as these stones are used to sharpen dull knives.

Many sharpening stones will also have sides with different grades; one will be rougher and the other will be smoother. This is to facilitate good blade grinding for better results.

To best learn how to sharpen a tactical knife, let’s discuss the angle of the knife to the sharpening surface.

Most knives have an optimal sharpening angle that is usually described in the packaging from the manufacturer. If you don’t know the best sharpening angle for your tactical knife, a good rule of thumb is to choose an angle between 10 and 30 degrees.

The way angles work means that shallower angles (lower) will create a sharper edge, while the reverse is true for steeper angles (higher). Steeper angles aren’t as sharp as shallow angles, but they will cause your knife to last for longer and be more durable overall.

Beginners may wish to try and angle between 17 and 20 degrees since this strikes a good balance between sharpness and durability.

You may or may not need to follow this step.

Basically, some sharpening stones can be used while dry, while others need to be lubricated with mineral oil or water. It depends on the stone you’ve purchased.

If your stone does need lubrication due to its particle density or type, we’d recommend using special mineral oil, even if it costs a little extra. A supply of mineral oil will last a long time and lead to a longer lifespan for the sharpening stone, as well. Better quality materials always lead to a better quality knife in the end, too.

To lubricate your stone, simply place the oil or water onto the sharpening stone surface and use a paper towel to spread the lubricant over the stone entirely.

Next, it’s a good idea to make use of an angle guide. These specialized tools are placed beneath your knife to keep it at the angle you’ve chosen for optimal results. They’re not too expensive and are much more reliable than hand estimations.

Instead of a tool, you can also use a sharpie and simply color over the very edge of your knife. After you’ve attempted to sharpen the knife with a few strokes of the stone, you should be able to tell if the sharpie has been worn away. If it has, you’re at the right angle.

Still, an angle guide is a better alternative if you can find one for purchase.

Take your knife and drag it across the rough edge of your sharpening stone, moving in the opposite direction from which you would normally use the knife to slice something. This moves the stone “against” the grain of the knife so that the grinding effort is more efficient.

Continue dragging the blade across the sharpening stone for a few strokes. Examine the knife edge every so often, checking to see if you’re at the halfway point to a new edge. An estimation here is fine, as it doesn’t have to be exact.

Be sure to flip your knife and do this process to the other side, as well. Each side of the tactical knife’s edge needs to be given its own attention. Once you’re done, flip the knife back to its original side. Make sure to stabilize your angle guide if you have one.

The Fine Grit Side

Now use the finer grit side of your sharpening stone and stroke your knife across its surface. During the process of sharpening on the rougher side of the stone, you should have created several “burrs” along the edge of your blade.

Burrs look like very fine wires or raised edges on the tip of your knife. As you stroke the knife against the fine side of the stone, your goal should be to smooth out all the burrs. Once completed, the result should be a pretty sharp edge.

Be sure to flip the knife and do the same thing to the other side, smoothing out all the burrs.

You’ll now aim to make both sides of the knife equal to one another for the perfect edge. To accomplish this, swipe your tactical knife across the sharpening stone and alternate the side that you stroke. Flip the knife over and over for an even number of swipes, such as 10 or 20.

Once completed, you should have a much sharper knife than before, but it should also be an edge that’s fairly durable due to the angle setting chosen earlier. You can always sharpen your knife to be even keener, but you’ll need to adjust the angle as we explained above. You also should get a good tactical knife to easy maintenance later. If you need one, check this list: